Pickups and analog alchemist Tim Olive could easily fall into doldrums of repetition, or variations so subtle only the performer and the most well-honed ears could detect them. However, he somehow manages to create something distinct with each release, even if his recordings carry certain recognizable elements that fall into the Olive aesthetic. These releases are no exception. 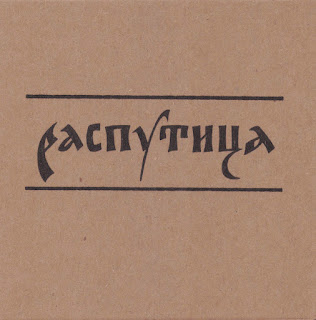 Rasputitsa is Russian for “the season of bad roads,” an annual part of spring wherein the ground is not quite defrosted enough to absorb excess water but the ground temperature is not quite cold enough to maintain the sheets of snow and ice that had built up over the winter. Hence, a period wherein ice and water coexist but do not mix, wherein one might be best to stay inside when they can find respite and maybe even jam with a recent acquaintance.

Although this was recorded in Kobe, Japan, a locale that does not experience a Rasputitsa like electronicist Sergey Kostryrko’s native St. Petersburg, the title perfectly captures the sense of isolation, solitude, and detachment that Rasputitsa, the album, conjures. Culled from hours of recordings from just a couple of nights of collaboration, these four tracks are carefully constructed crossed frequencies in a soundworld of abandoned warehouses, corroding industrial complexes, and desolate snow, or rather that brief part of a verdant spring when one can see the end of winter’s quarantine but one cannot quite touch it. (NB: This was recording in March 2019, long before the pandemic.) Rasputitsa seems a narrative of human contact warped by electronic media. A distant radio mashes static, industrial ambience, and textured electronic crackles. Muffled engines churn and hollow tones agitate to rise above the underlying ambient susurrations. Detached hisses ride atop jangling metallics. The result sounds somewhat flat, but all electro-improv does not have to plumb the sonic depths or create wormholes of noise. Instead, Rasputitsa seems content to survey time and two-dimensional space, evoking radio transmission from an unknowable sender, intertwined with other ambient electronic fragments whose origins and meanings remain cryptic. 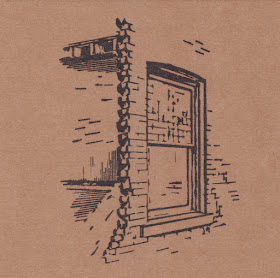 Eidolon , Greek for a figure, representation, or phantom, presents a wonderful contrast to Rasputitsa. I would like to attribute as much of this to the different musical setting and list of collaborators as to any particular vision Olive himself brings to the table. Stated differently, as much as he and Kostyrko are responsive to one another and adapt their playing in real time to the moods and sounds that surround them, Joda Clément, Mathieu Ruhlmann and Olive are, as well, and to quite different an effect.

With Clément on MS-20, harmonium, glockenspiel, field recordings, and feedback, Ruhlmann on ukelin, cymbal, tapes, and various objects and Olive on an assortment of deconstructed electronics, Eidolon sounds full, even crowded. Although many of the sonic scraps brought to the table are muted and sound distant, the overall effect has more auditory depth and direction (minus the linearity implied) than Rasputitsa. Some of this may come from the periodic surfacing of distorted voices which hint at a narrative that remains elusive to me. Some may come from the found sounds and field recordings, which are prevalent, and the acoustic instruments which serve to deepen the daze and abruptly break the spell, or at least switch the scene. Even the electronics adopt an acoustic timbre through much of this. The result is Eidolon, a finely crafted electro-acoustic session by three of the foremost practitioners of this type of spectral EAI minimalism. Another fine addition to the catalogs of Olive, Ruhlmann and Clément and very much in the vein of what those familiar with the Caduc and 845 Audio sound might expect: abrasive and deceptively static at times, but textured, meandering, and hauntingly beautiful, like an aural exploration of Jasper Johns’ phantasmic experiments with gray on gray. 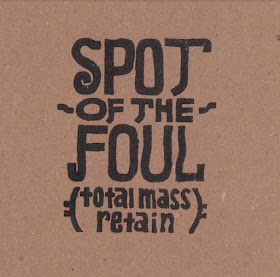 Despite his penchant for collaboration, Olive has, from time to time, embarked on recorded solo ventures. Spot of the Foul (total mass retain) is his second ever and first in 13 years.

Spot of the Foul is heavier than Rasputitsa and Eidolon and, for that, I would even say it is stronger. Olive’s music is always engaging and thoughtful. Here, however, it seems he was able to set aside his aptitude for responsivity and shaping his sound to that of his collaborators and pursue a project wherein he only needed to respond to himself.

Spot of the Foul is dark and dense. It leans more toward noise than most of his more variegated EAI collaborations have. As the listener allows themself to get lost in the thick morass of drone and pulsing mechanics that characterize the album, however, they might begin to notice the delicacy and intricacy of it all. This is not just a wall of sound, albeit one filtered through Olive’s unique array of tools (magnetic pickups, metal plates, springs, wire, tuning forks, electromagnets, bow, breath, dental floss, envelope generator, fuzz, spring reverb, preamplifier) and sensibilities. It is a textured and undulating interweaving of the subtle and the amplified. His characteristic creaks, radar beeps, and engine thrumps are there. Here, however, they are complemented with a heavy underlying bass, mechanical growls, grinding feedback and a density of gloomy and harsh atmospherics uncharacteristic of Olive’s other work. This creates a dense but variegated fabric of entangled, metallic threads. Together, they clash, rattle, and resonate in some very intriguing ways.

Spot of the Foul shows another side of Olive, one that apparently required solitude to coax out. It is gloomier than much of his other output, more doom and heavy, multihued drone than the EAI, wavering between patient minimalism and electro-clatter, that Olive frequently explores. I am not sure whether Olive intends to continue exploring these darker corners, but, if he does, Spot of the Foul bodes well for what he will find.