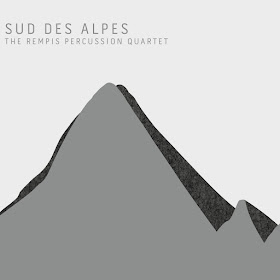 On their way to a gig in Geneva, the Rempis Percussion Quartet encountered issues with the train they were riding. Specifically, the train lost the use of its braking system and came to a dead stop on the tracks. After much difficulty and stress, the band thankfully made the gig which is lovingly preserved right here on the band's tenth official release. All of the titles here reference the railway hassle with the exception of “Odwalla” which is an Art Ensemble of Chicago cover that casually leads into an original composition called “Evacuation,” which is also this recording's centerpiece. But let's start at the beginning...

“There's a Jam on the Line” starts tentatively, like an engine sputtering through multiple starting attempts. When it gently fires the hum is barely noticeable. Movement happens trepidatiously but gathers steam and purpose after a couple of minutes. The twin engine percussionists Tim Daisy & Frank Rosaly, fifteen years in the chassis, spark bold melodic statements from reed man Dave Rempis and bassist Ingebrigt Haker Flaten as support steadily strengthens. A slow groove cushions Rempis' first swing for the fences easily and smoothly. Rosaly and Daisy now reveal why they've had a lock on this band for so long. They are perfect foils for each other, consistently filling in for one another and contrasting styles in a way that supports the music as a whole. Flaten becomes an extra catalyst, pushing the others forward until the entire unit is in full flight, unraveling and revealing new music rapidly and with precision.

Next up is “Odwalla / Evacuation,” which follows a similar performance model as the first track, but stretches and extends it in terms of both time and construct. The build from the beginning is nearly seven minutes long, which made me a bit impatient for the payoff to be honest – but good things come to those who wait, and if you skip over those first seven minutes it's just not going to have the same result. Trust me, I went back and listened to it that way later. You have to listen to all of the pencils, pots, squeaks and kettle taps. Out of that Rempis emerges playing circular patterns while Flaten rumbles (mainly) on a single note. Finally the slow build reaches an ecstatic plateau. This one is so much higher than the heights reached in “There's a Jam on the Line” - and this seems entirely impossible. If the first track takes you into the realm of rapture, this one is a complete out-of-body experience. It lasts for quite a while – but not nearly long enough. Extraordinary.

Rempis takes a solo at the beginning of “Late Arrival,” alternating free overblown insanity with more conventionally melodic runs. The trio arrives in a blast from underneath, with Flaten's bowing serving as a flapping magic carpet. By the 2:30 mark, the entire band is weightless and barely able to hang onto their own clatter – approximating the panic involved when one is hopelessly late for an appointment. Conversely, the last three minutes are an accurate interpretation of the exact moment of arrival, as they are as peaceful, relaxing, and extremely winded.