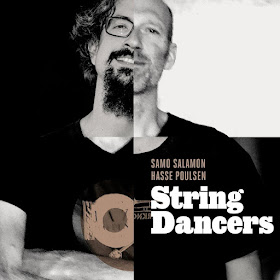 Samo Salamon and Danish guitar master Hasse Poulsen deliver new sounds at the nexus of jazz and folk music from around the world with String Dancers, modern guitar compositions for two acoustic guitars.

Yet. somehow, I cannot take the opener at its word. "Ultra Serieux," the only title in French, seems tongue in cheek, as the duo gives the listener a little of this and a lttle of that underscored by deeper notes. Salamon and Poulsen stake their claim from the get-go; the music will be varied, lively and fun but will never slight its sources.

“Austrian Lake” a fine early example in the recording of the two finding the groove and a swing in their interactions. Taking a hint from the title the music here is pastoral but plumbs depths investigating what is above and what is below the surface.

“Coverless” illustrates the duo’s connection but again, never at the expense of the music or listener. Who plays what? Does it matter? Is there a tone to distinguish or a vibe? To my ears their aim on this track is to blend creatively, spontaneously. Mission accomplished.

“Two Sides of a Mountain” is “harsh” or heavier with a bass line wiry and taut but again another groove with one guitar in the lead while the other pushes, one charging the other supporting. Its slightly abrasive opening, with its rising and falling notes toying with lightness and darkness, this cut insinuates itself into your ears.

The two get a little more abstract on “Sometimes a Bird” changing the pace for good measure. Unique in the context of the album it shines light into dark corners and seems longer than 3’30’ in a most pleasing way.

“Free Noses” at first glance I read Noises for Noses, but I can read into things, though playfulness is present. The duo plays in unison and gives space for discordance as well but it's a song like “Free Noses,” where Salamon and Poulsen suspend the music between those two points that the two’s music finds its yin and yang.

“Soft Grass” is a recumbent but tense 5’48” that relies on some deft aural contrasts to create a mood but delivers a complete, whole song as well.

Now we come to one of my two favorites on the album, “String Dancers.” Its aptly named as the medium tempo conjures up fluid emotive bodies dancing through space. The starts and stops are notable and at 4’28'' or so is the album’s satori for me as Salamon and Poulsen are everywhere and nowhere at once, lost in the music, two musicians playing their instruments, not just getting sounds out of guitars. The relatively abrupt ending feels like they have nudged you to a mountain top then disappeared leaving you with the echo of their art and an infinite vista ahead.

The next track, “Mind Fuel,” indulges the artists’ interaction with their guitars as vehicles for expression rather than static objects; its length never belabors the point but does not dodge the topic at hand either. So, it's not a blowing session but it is a work where two musicians find a lot of possibilities in their art then explore those discoveries deftly as well.

“Cornering,” another personal favorite, has a walking bass back porch blues vibe that sings the global reach of the guitar. It is a favorite on an album of ones that grow on you.

Salamon and Poulsen are playfully competitive on “The Scent of Rain” with its kitchen sink pastiche in rhythms and tones that are engaging and dynamic.

The album concludes with “A Word We Heard,” a solemn percussive finish that appeals as a proper bookend to the opening. I’m a sucker for ambient sounds in a recording and the two deliver here with squeaks and scrapes as they animate their guitars and songs with an intense approach that again asserts and culminates, for now, their partnership.

In approaching a duo or even a trio recording I admit to preconceptions or expectations but not necessarily requirements. Will the musicians play off against and with each other? Will there be a variety of tones and timbres? In this case I was worried there wouldn’t be instruments to keep my toes tapping because to me, groove, in all its permutations, is essential. Thankfully, the music is immersive, and its syncopations, rhythms and tempos animate toes, fingers, and minds as well.

Salamon and Poulsen are an elastic duo with a strong rapport who know when and how to engage, unite, and diversify the “jazz diaspora” on these twelve tracks.