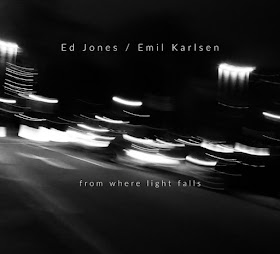 This cd, which came out after a forced pandemic hiatus for both musicians, is a slow burner. Track by track, minute after minute, it won me over so to say that it is (now that this year comes to a closure) one of the best duos I’ve listened to so far. I’m a big fan of reeds-percussion duos and have listened to a lot of them, but that makes is really hard to feel that there’s something new its time. This is one of those times.

Ed Jones plays tenor sax while Emil Karlsen is on percussion and drums. Their task is one the difficult ones. The sax-drums duo in free jazz and improvised music had, by now, built a strong tradition of masterpieces. Thankfully for them (and for us, the listeners) they choose to present their truth without follow a certain path or tradition. I guess the pandemic dystopia that has hit so hard all musicians played an important role on this. Talking to any musician right now you get the feeling that they need to play, that playing for them has the urgency that never had before. From Where The Light Falls seems like it was an important procedure for both artists.

I must say here that FMR by being such a prolific label has had some misses here and there. But the label’s recent years output is of the highest standard, making it one of the best in improvised music right now.

A duo by definition is a laconic statement when it comes to music. Still it is a totally different situation than playing solo. For me, as a listener, the key to a successful duo is not two strong individual voices but the interaction between the artists, the way they disavow their egos for the collective way of thinking and playing. Both the musicians here think and play in this manner.

The tenor sax can be intimidating and “heavy” many times. Pardon my minimum technical knowledge but as a listener I feel the burden of its jazz tradition plus that it can saturate a recording if the sax player feels like it. Ed Jones seems like the ideal partner. His playing is subtle, relaxed but focused on what Karlsen is doing. And how to respond. He improvises in short phrases blending melody in his improvisations. Karlsen has this ability of being the leader while he is not. Even though I’m familiar with his work, I am too impressed by his playing. The way he utilizes his drums, makes his percussion work so vital for this recording. He is definitely not the one who just keeps the tempo.

All eight tracks of the cd refer to a month, probably reference to the time spent during the pandemic. It seems that they took advantage of the time they had in isolation and this cd proves it.