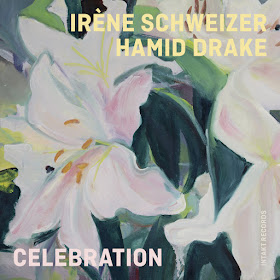 If you have heard Irène Schweizer’s duos with drummers (including many of the free jazz luminaries of the last forty years, Han Bennink, Andrew Cyrille, Günter Sommer, Pierre Favre, Louis Moholo-Moholo and, more recently, Joey Baron), you likely know what you are in for, even if the percussion is always a world in itself.

Schweizer, of course, is a singular pianist. Her love of melody (apparently, many borrowed from South Africa, in this case) is matched only by her ability to detour into a free territory that combines the discipline of the classically trained with the roots, rhythms, and chops of the keenest practitioners of jazz in its myriad forms. Just listen to the grooving 'Good Life', the Vince Guaraldi-styled 'Blues for Crelier', and the infectious 'Song for Johnny – In Memory of Johnny Dyani' for examples of her rootedness. Then, there is also the potentially more obvious free improv influence, evidenced in most of the pieces included on Celebration, that stretches back a half-century to Schweizer’s days at the forefront of free playing in Europe. Indeed, her performance on Celebration, capturing her and Hamid Drake live at the 40th Festival for Free and Improvised Music in Nickelsdorf, Austria in 2019, that Schweizer, approaching 80 years of age, has still got it, and in abundance, at that.

Drake, a decade-and-a-half younger, requires about as much introduction as Schweizer. And Drake does his thing as well as Schweizer does. Both musicians play impeccably, ride the improvisational waves convincingly and zig-zag beyond the usual script, but rarely into spaces beyond the wide zones they have trodden before. That invites, of course, one of the big questions with improvised music. To what extent are improvisors expected to continually push stylistic boundaries and to what extent should they dedicate themselves to perfect their own style at the expense of such free-wheeling exploration? Schweizer and Drake strike a balance that leans toward the latter, here, with notable exceptions such as 'Stringfever'. At the risk of sounding trite, Schweizer and Drake communicate immaculately and, in the process, sound as much like themselves as I have heard them. And that is part of what makes this album so delicious. This is two master musicians from different scenes and generations, who clearly appreciate each other’s journeys and strengths, playing some damn fine music.