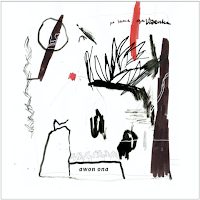 Throughout this album, the listener is taken from one suprise to the next. The music is an unreal mix of structural and compositional cleverness, improvisational inventiveness and stylistic collision and harmony.

You cannot possibly find two more different musicians finding a common voice. Austrian pianist and composer Ingrid Schmoliner comes from a classical avant-garde background, with experience in free improvisation. Chicagoan Hamid Drake is one of the most versatile jazz drummers around, the king of polyrhythms and with an encyclopedic knowledge of rhythmic patterns from around the world.

The combination is extraordinary in both the literal and metaphorical sense of the word. This is not world music, because the genres do not blend into some in-between-state, but keep their strength and character while being in full harmony. Schmoliner and Drake find themselves on various levels: the rhythmic complexities, the shamanistic singing, even if the styles are again totally different, their openness to new forms and the universal language of music, the solemn freshness and the natural organic flow of their sounds.

Schmoliner's style on her prepared piano is all her own: rich, intense, harmonic, with lots of repetitive and rhythmic elements, dramatic at times, cinematic at others, and she has the incredible power to be controlled and full of musical abanon at the same time. Harmonically, her playing remains deeply rooted in the classical idiom, not in jazz. She is also a trained singer, specialised also in overtone singing and yodeling.

The album tracks and the title all come from the Yoruba language from Nigeria, at least from what I could deduct from some internet searches (Keke (wheel), Igbi (wave), Eeru (ash), Afefe (air), San (stream), Ina (fire), Joidi (?), Emi (me), Aago (time), E Dupe (thank you), Gbogbo Ibi (everywhere). The album's title could mean "ways", an apt description of the different roads in music can all lead to the same place.

"Emi" is an amazing 13-minute mesmerising piece built around repetitive phrases and with a steady rhythm, that first flows like rapids, relentlessly, wild and powerful, allowing Drake to show is artistic mastery of adding even more complex rhythms to the endless stream of notes and harmonies that gush from the piano, and even later in the piece, when the speed diminishes, she produces a superfast repetitive playful phrase with her right hand, and Drake is with her, despite the change, despite the sudden shift in mood.

On "Joidi", Schmolinger's singing brings an update from "Kumts" on "Watussi" from 2013, an incantation that demonstrates her vocal skills and spiritual force.

"Aago" is built around sustained deep tones, possibly the result of strings being stroked inside the piano, with Schmoliner singing. Drake emphasises the eery feeling and sense of anticipation. The darkness of the percussion and the single repeated piano note contrast with her bright singing and beautiful melancholy tone.

"E Dupe" starts with some incredibly rich drumming by Drake, inviting Schmoliner in with her own percussive repetitive fireworks, and evolving into Drake's Arabic spiritual chanting, without any of the intensity of the piano or drums losing any of its power.

I will not review all improvisations, but the combination of contrasts and alignment, its bifurcation and convergence is omnipresent, of the modern with the ancient, the particular with the universal, the boundary-breaking with the traditional, all blending into this wonderful co-creation of relatively unique and often spectacular music.

The first CD was recorded in "Live At Artacts" festival in Austria on March 6, 2020, the second CD at the Jazz Cerkno Festival in Slovenia on September 19, 2020.
Listen and download from Bandcamp.
Stef on Tuesday, September 14, 2021
Share