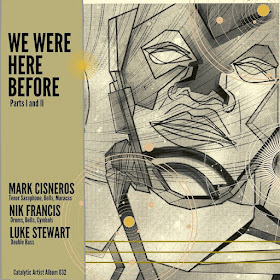 We Were Here Before, Parts I and II, is a recording dedicated to the late musician Aaron Martin by the trio of Mark Cisneros, Nik Francis, and Luke Stewart released by Catalytic Sound via its Catalytic Artist Album fundraising program which helps raise money for and awareness of for organizations that work in solidarity with the Movement for Black Lives and social justice. The trio has suggested that all donations received from the sale of this digital album should go to Empower DC, which since 2003 "has advanced racial, economic and environmental justice by investing in the leadership and organized political power of DC’s lowest income residents and communities."

A recording that reveals integrity in a fluid din of disparate sounds in variegated unity as subtle shifts in playing compound the trio's potency. Easily a release to get lost in. I have started and scrapped several efforts to highlight specific parts and it is not like there are any passages where the musicians shine and transcend. But words fail me with this release.

Luke Stewart on bass illustrates his chops and why he is in such demand, Mark Cisneros, reeds, and percussion is fluid and creative, spontaneous but locked into the groove and Nik Franci, who delivers a diverse smattering of sounds underneath it all that always keep you guessing and progressing, is a revelation for me; he is a drummer/percussionist who uses his whole kit and serves the music extremely well without surrendering his identity. The same can be said about Cisneros and Stewart but subjectively the drums center this release for me and that is no slight to the other two artists.

It is a flat-out immersive experience and following the outline provided in the release below is helpful but not required.

It can be daunting to find the words and examples to declaim the achievements of this recording. One risks being obtuse to extoll its passion. It is best to let it wash over you, opening your mind to its cinematic but direct qualities.

Art is more than asking questions and certainly more than giving answers but offering a new, personal authentic perspective.

This release offers the flip side of having been here before. Struggle strengthens you. We Were Here Before is a marvelous album for its depth, diversity, and integrity of purpose. And it grooves, wails, screams, and hits the Soul.