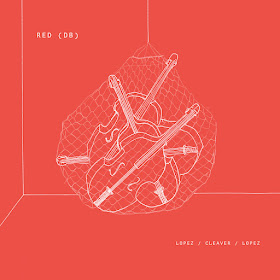 The challenges of conveying site-specific performance as a mass-produced recording. Or, of any one site capturing the performance as planned. (Should that be “hoped”? Certainly, it’s not “expected.”) Or, of a recording capturing any listener’s attention, redirecting it from what may be in the room to what is in the mind, a kind of aurally triggered space, to do so the music itself must feel three-dimensional, droning tones, arco, and rumbling drums intersecting along multiple axis points. Now, add the fourth dimension, not measured by the duration of any particular musical moment, instead, with Cecilia Lopez’s radically compelling RED (Db), it’s the multi-dimensionality of resonant bodies in space.

The concept, on paper and captured in still images, is wild: a quartet of performers—Lopez on electronics, Brandon Lopez on double bass, Gerald Cleaver on drum set, and Julia Cavagna performing scored movements—are positioned in a performance space with large woven nets suspending, in one net, double basses, and, in another, various sized drums. The performance, captured at Roulette and released on Relative Pitch, is sensational.

It would be extremely difficult to find players better suited to Lopez’s composition: both Lopez and Cleaver have explored electro-acoustic music, site-specific improvisation, and small group interactions to great success. And, while Cavagna’s specific movements are more difficult to represent in audio, once you watch her interact with the group, the physicality of Lopez’s composition becomes clear. Pushing the suspended nets, Cavagna triggers pulse-like pendulum swings, dopplering through Lopez’s warm drones.

“RED (Db)” seems to have emerged from a series of “Red” compositions, evolving over several years, as netting and suspended double basses gradually emerged during the piece’s expansion. The current quartet version feels like a dramatic high. Cleaver and Lopez are two of the most talented and creative players, using creative methods to bend and warp the sounds of their respective instruments in rich collaboration with the nets in motion. Put simply, “RED (Db)” is both conceptually invigorating and musically ecstatic. And like some of the best, similarly inventive albums (thinking of Carl Testa’s SWAY series, for example), Lopez’s music rewards multiple listens (and views), as it captures your full attention.