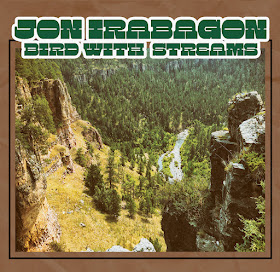 Ahh, COVID-19. How much has been written about it and how much has been lost to it? At the same time, how many new possibilities appeared along with the global mayhem? For NYC based saxophonist and composer Jon Irabagon, the pandemic took him and his family on a journey westward to the Black Hills of South Dakota. There the artist found a part of the world overflowing with natural beauty and welcoming solitude. The story goes that he played his saxophone to the trees, the rocks, the rivers, and  streams. From it came an organic exploration of Bird - namely the one and only Charlie Parker - and subsequently a solo album that traces the flight patterns of the venerable saxophonist through his songs.

Irabagon's own words explain this best:

“My family and I fled New York in March 2020 and went to South Dakota to be with my in-laws. A couple of weeks turned into nearly nine months. I ended up spending six days a week, six hours a day at the canyon. I was working on tone, extended techniques, playing standards, composing. I saw it move from winter to spring to summer and into fall, when it started getting cold. As the time drew to a close I thought I should document my time out there, where I learned so much. It just so happened that Charlie Parker’s centennial came and went while I was there, so I thought I should focus the album completely on his tunes, inspired by his attitude.”

Recorded in a DIY fashion, Bird with Streams is in some sense a field-recording of an artistic metamorphosis. No, not in the caterpillar to butterfly sense, but rather Irabagon is noted saying that he had avoided albums of standards. It seems that after long, daily sojourns hiking to different parts of the Falling Rock park and collaborating with the natural reverb of the canyons - which is sometimes captured in the recording - something changed for him and resulted is this collection.

Like Anthony Braxton, another intrepid saxophonist who famously reinvented Parker with his sextet nearly 30 years ago, Irabagon mines the legendary be-bopper's music and brings this seminal work into the now. The opening track 'Anthropology' is not rendered at the typical breakneck pace, but quite the opposite as it dips into extended techniques and a fuzzily rendered melody. The follow up 'Sippin' at Bells' is more traditional, the melody bounces along with a full tone, leaping though intervals and splitting off into flights that touch on rougher tonalities, but circle back before abandoning the way. 'Now's the Time' kicks off interestingly with what seems like the gentle roar of a river in the background and bird-like chirps from the sax that slowly turn to an air-filled roar (and there just may be the percussive rendition of the melody expressed by the pressing of the keys as well). 'Hot House' is treated quite differently, the melody is slowed and elongated, but played with bursts of energy that increase as the piece evolves. Along with the 13 Parker tunes, there are two originals, 'B. Schwifty' and 'Get Schwifty' that show the synthesis of Parker's music as well as influence of Rick and Morty.

A wonderful document of an personal exploration of nature and music. 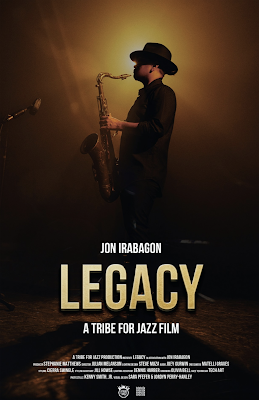 Something besides the saxophone that Irabagon has mastered is the art of satire. Through humor and gentle appropriations, his art extends beyond the musical universe and into imagery and, now, film. It is hard to tell sometimes if what you are seeing is lovingly co-opted - like some of the covers of Mostly Other People Do The Killing's albums or his own recordings like Outright or the evergreen Foxy. So it is with the short opening segment of Legacy, you cannot be entirely sure if it is being playful or dead serious, before it features the saxophonist in a first rate 40-minute solo performance. As Irabagon narrates, images of the saxophonist jogging through the city, walking purposefully through a fancy apartment, and playing to the trees illustrate his declaration of dedication to music and life. I'll go with 'serious but with a wink' as my official assessment of the introduction, which is self-aware but also quite poignant.

The solo concert is gorgeously choreographed and shot by the Columbus, Ohio-based jazz advocacy nonprofit A Tribe for Jazz. Irabagon is featured on a dark stage, spotlight on the melodies coming from his horn, which come from compositions spanning his on-going career. The concert begins with the slow, thoughtful piece 'Dark Horizon' from his recent double album Invisible Horizon (which is one part with Matt Mitchell and the Mivos String Quartet and one part solo.) Here, bathed in red lights, the camera is always in motion, circling the hat bedecked player as he renders the melody breathily and beautifully. Next, the colors skew purple and Irabagon digs into the more frenetic, swing-like 'Outright!' from 2008's album of the same name. One tune that sticks out is 'Distilled Hope' from 2009's Here Be Dragons, which like many of the tunes that are explored in this concert, is delivered in a rich, vibrant tone. Later in the the concert, the hat is gone and the lights are dark blue with hints of red, and the saxophonist lets out some extended tones along with hushed reedy puffs. On the closing track 'Alliance' (previously unreleased), the hat is back and the tune is beautifully up-tempo and expressive. There is little to take from the hat's coming and going, it is just a part of the austere, detailed scenery that allows the listener/viewer to bask in the music.

Hardly a retrospective, the film is rather more a statement of intent as Irabagon is an artist who obviously still has a lot more to say!