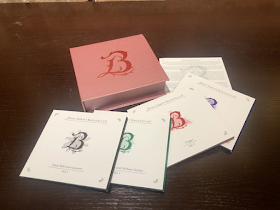 There’s a scene in Amadeus when Salieri is getting his first look at young Mozart’s scores. He reads through them as he walks into his studio. The soundtrack swells up with whatever piece he’s reading, and he falls into a reverie. The scores fall from his hand, the leaves of music like the leaves of a tree in autumn. My question is this: was Salieri translating the written word to the sound of violins, cellos, etc., in his mind? Was he imagining what it would sound like? Or was he reacting to the musical ideas in their pure form. Was he reacting to the musical notations as direct ideas, unmediated by timbre? I wonder because, what if those same ideas emerged not from a Viennese orchestra, but from a British band shell group, or an accordion orchestra, or a punk group?

I wonder because this— the question of musical ideas and their relationship to the enacted timbral experience— is one of the fascinations that infuses my love of John Zorn’s body of work.

In 2015, from March to May, Zorn set out to compose a new book of tunes (as he had previously with the three books of Masada tunes) and came up with three hundred. His goal was to compose tunes that were “more atonal” then previous tunes books, and to create tunes that would serve as heads around which improvisers could blow freely. Five years of performances happened with a wide and deep variety of ensembles/players, and then some “choice” groups went into the studio. The four discs of this Bagatelle’s box set are the first fruits of that harvest, the discs featuring, respectively, the Mary Halvorson Quartet, Erik Friedlander and Michael Nicholas, Trigger, and Ikue Mori.

No compositions are repeated in the set. I had hoped at least some would be so that I could make comparisons, to look at the impact of musician and genre and instrumentation on a tune. Still, ostensibly, all the tunes of the book are the same kind of thing. This isn’t a knock on the creativity of the effort. It’s just a fact that a bunch of tunes consciously composed as a set will have some sort of unity to it. Do the mysteries of timbre, idiom, improv upset this assumption?

Not only are the groups different players, they are playing from different worlds. Trigger is hard core/punk guitarbassdrum trio (forgive the sloppy taxonomy). Mary Halvorson’s is a two guitar post-bop/po-mo/free quartet. Erik Friedlander and Michael Nicholas are two free improv cellists in Zorn-land. And Ikue Mori is … Ikue Mori.

This is an extraordinary set. The tunes are clever, intriguing, and bewitching. In the “head-blow-head” sense they provoke great improvisations from great improvisers. The tunes are a conceptual core threaded throughout in the form of melodies that hold together radically different aesthetic experiences. It is the melodies that hold this boat together. The melodies “are” the tunes.

Guitarist Mary Halvorson’s quartet, with Miles Okazaki also on guitar, Drew Gress on bass, and Tomas Fujiwara on drums is easily the most joyous of the four. Halvorson is a dang national treasure, and while it might seem a thankless task to be her “second guitar” the two are having such fun playing off and with each other, and suddenly the fun is happening inside you. It’s the sort of fun that Eric Dolphy had in his compositions, with reckless, daring (as in “I dare you”) musical leaps across chasms of pitch, harmony, and timbre. The guitarists play freely with the envelopes of their instruments. Sometimes approaching the dry tone of “jazz guitar” other times getting at the ineffability allowed by effects boxes and metal melodrama and surfer surrealism. Gress is a dream (he always is), and Fujiware drives the whole band from underneath.

Friedlander and Nicholas’ two cello set (see this review talking about another of Zorn’s two cello project) begins with the sort of wide vibrato jump scare that Bernard Hermann made obligatory long ago. It’s sort of a calling card. Two free jazz cellos just showed up! Moving on, I am reminded very often of Friedlander’s work in the Masada String Trio. Does this make me shallow? It’s come to the point, I’ve heard so much Zorn ‘n’ cello that improvising cellos take me into a particular space — it’s an idiom. Though Zorn aimed for atonal, there’s still plenty of groove happening, and the two cellos shift from stabby-stabby to lush to intricate with facility. As with the two guitars in disc one, the communication here is a treat. These gentlemen are having a good time.

Trigger, featuring guitarist Will Greene, Simon Hanes, and drummer Aaron Edgecomb builds a bridge between Zorn the tunesmith and Zorn the hardcore/punk lover. I am not a hardcore/punk lover. Only a “liker.” I had not heard Trigger before, but when I tapped “play” it immediately felt familiar. I tracked it back to Zorn’s album, Insurrection, featuring different players with Julian Lage and Matt Hollenberg as paired guitars. The first tune on that disc, “Recognition,” occupies the same sonic space as this entire Bagatelle’s disc. But while Insurrection moves into different spaces, this disc does not. It feels like a case of “If you like this sort of thing, then you’ll like this sort of thing.” It further illustrates the fact that Zorn’s tune’s can occupy any idiom with startling success, even if that idiom is not especially interesting to me.

Which brings us to the Ikue Mori disc, which has left me a bit speechless. I am in awe. Mori “plays” a laptop for this work and the pieces have such wit, depth, knottiness, and complexity … it may be just that I’m not very familiar with electronic music these days, but I found myself asking, more than once, how is she doing this? Her sounds are “typical” computery synth sounds or instrument patches (which makes them untypical sounds for this context), and come in quantized fragments that have me wondering what is improvised and what not. Just as so much of Zorn’s work is found in cinema soundtracks, Mori’s work inhabits the space from 1950s electronica to “Song of Storms.” My intrigue and curiosity (i.e., ignorance) don’t form a barrier to loving this disc, which is in the purest sense one of the most beautiful sets of music I’ve heard in years, but drive me to listen again and again and again.

Zorn is in a race (consciously or not) to become the world’s most prolific composer (Zappa, Braxton, and Trad Arr are still ahead, I think). I once heard Zorn lament about folks likening the Masada quartet to Ornette Coleman’s original group. He attributed it to the fact that the two groups had similar instrumentations. But Coleman’s project through those Prestige and Atlantic years was creating weirdo melodies — wonderful weirdo melodies — within which joyfully free improvisors could fly (ditto with Braxton’s 1974 and 1975 recordings for Arista). This work, the Bagatelles, feels like part of the same project, and I kinda can’t imagine a better project to join up with.