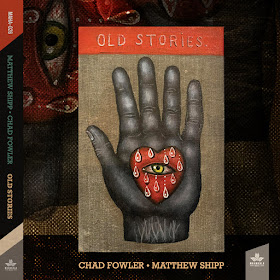 When he walked into the studio, Matthew Shipp was at the piano playing Duke Ellington ballads. “Really swinging, beautiful,” recalls reedist Chad Fowler in the album notes. Other than arranging the logistical details, the two hadn’t discussed the music they were about to record. Their ensuing spontaneous musical dialogue is titled Old Stories (2022) and is published on Fowler’s label Mahakala Music. The 2-CD recording captures their very first time playing together, but the deep simpatico heard between them makes me think they must’ve been playing together for ages. It’s a compelling narrative. And so is their music.

Ellington has been a perennial inspiration and touchstone for Shipp’s art, notably on a wonderful 2015 trio recording titled To Duke (RogueArt) , covering classics and offering originals in a riveting avant-garde spirit. In a sense that’s more oblique though no less alluring, one might hear the spontaneously composed songs on Old Stories as magnifying that homage, this time with Chad Fowler playing stritch and saxello, himself bringing a longstanding admiration for Ellington’s saxophone sideman Johnny Hodges. Shipp’s playing has delightfully lyrical moments on Old Stories, and when Fowler coaxes sweet bluesy tones from his horn, even a fledgling like me catches echoes of Ellington. But it’s volatile, and in the blink of an eye Fowler can be wailing fiercely amidst Shipp’s rapturous storms.

Old Stories is divided into 14 tracks or “chapters,” and Shipp and Fowler have an endearing magnetism throughout. Through both communicative contrasts and mirrored responding, there’s always an emotional valence to their dialogue. Some passages can be emotionally exacting – stories full of pain or rage can be like that. But that doesn’t diminish their value, their importance. There’s vibrancy in expressions of pain. To that point, Fowler’s label Mahakala Music notes “our aim is to create and release aggressively beautiful music.” In Tibetan Buddhism, Mahakala is a deity that represents pure compassion, but expressed through the slaying of egoism. The tension between delicate beauty and ferocious bouts can be heard on nearly every track of this album.

On this topic, Fowler answered some questions I had via email. He wrote about being “motivated by creating catharsis via music. Bringing these abstract concepts into play more concretely in a compositional sense, a piece can use emotion as a musical palette in the same way a melodic fragment, harmonic progression, or textural change is introduced and developed in a composition. Emotion is a higher level of abstraction over the components of traditional music theory. I strive to be able to shift between, say, ‘angry’ and ‘distraught’ in the same way I might alternate between G minor and G major.”

Through most of the album Fowler plays the stritch, a kind of straight alto saxophone often associated with Rashaan Roland Kirk. The only exception is “Chapter VIII” where he plays the saxello. Fowler notes that “playing a strange instrument” is one tool he employs to aid in “shedding the creative baggage I've accumulated both knowingly and unknowingly over the years.”

In a career studded with masterworks, pianist Matthew Shipp has numerous duo recordings, including with Roscoe Mitchell, Rob Brown, Ivo Perlemen, Evan Parker, and others. In an interview with Free Jazz Blog, Shipp noted at least two elements to playing duo: an openness to each other’s language and a commitment to “the gestalt'' between the players. This is evident in the distinctive sound created between Shipp and Fowler. Each spontaneously composed song travels the emotional distance from a theme told in sweet or fragile voicings, to another that’s vociferously hammered and bellowed – back and forth often multiple times in the same song. Motifs arise and transform quickly but coherently – they weave a narrative from razor’s edge rawness to swinging strut to sweet melancholy.

This music and theme of Old Stories reminds me of a line in a Herman Hesse novel, “My story isn’t sweet and harmonious, like invented stories. It tastes of folly and bewilderment, of madness and dream, like the life of all people who no longer want to lie to themselves.”

Old Stories is available as a double CD or digital download.