In general, but not as a rule, I seem to enjoy solo albums the most during winter (maybe to do with the isolation of the cold months) but for me that's extended into the spring and summer this year. I generally let my whims dictate the music I listen to from day-to-day, and so have been listening to solo recordings disproportionately, both free jazz and otherwise during this unusual period in time. I'd like to extend particular kudos to Relative Pitch, who have issued some really fantastic solo recordings lately that have colored these past several months for me with their contrasting personalities. We covered two of these releases in a couple of our recent round-ups (Virginia Genta's Amplified Sopranino Saxophone and Alex Ward's Frames ) and I put some thoughts down regarding the rest of them (so far) here. 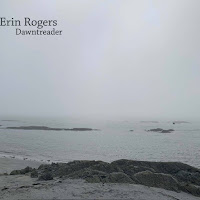 Honestly, the Canadian-American composer, performer, and saxophonist Erin Rogers has flown completely under my (admittedly very weak) radar until now, but has been extremely active in the New York scene for some time. Her many projects focus on a convergence of classical, avant garde, and theatre with some of her main outlets being her groups thingNY, Hypercube, New Thread Quartet, and Popebama. Dawntreader is her first solo release and while I came into it cold, it won me over with its broad range of dynamics and timbre (not to mention its title reminding me of a favorite book).

On "Beacon" Rogers explores the tenor's upper register, twisting her piercing multiphonic yelps and whimpers against themselves in long segments of circular breathing intercut with well-timed and perfunctory silences. On several of the latter passages she vocalizes long glissandos as she plays, which result in powerful and sublime resonances that sound as though they might explosively flower the bell of her horn at any moment. The aptly titled "Surface Tension" bubbles with breathy swells and reed pops that create a palpable sense of anxiety, especially over the first half of the piece. One of the things I enjoy the most about the piece is that you can almost feel the vibrations from her horn. It becomes malleable in her hands, a medium as fluid as the air it wields. On the final piece "Breaking Waves" Rogers finds still untraversed sectors of timbre to explore. Her rough cut passages blister the soundscape with pugnacious bellows and knife edge peels of stabbing dirge. 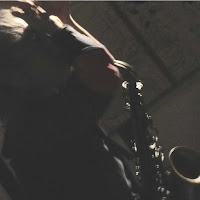 It'd been a while since I saw anything from the Japanese multi-instrumentalist Masayoshi Urabe. I think the first record I bought that featured him was his 2002 duo album with guitarist Gary Smith, which remains a favorite of mine. I also picked up his 2010 album with cellist Kiyoharu Kuwayama which caught my eye/ear via a write up from Stef, way before my time reviewing for the blog. Urabe draws a lot of comparisons to Kaoru Abe but other than sharing a very expressive style (they play nothing alike, IMO), perhaps due to his use of long silences, guitar and/or harmonica, and propensity for solo performance. On What Hasn't Come Here, COME! the listener encounters an extended solo alto saxophone improvisation (with a bit of tasteful harmonica), where Urabe is given ample room to spread out and experiment.

The single long track that makes up the recording begins with harmonica, vocalizations, blubbering, grunts. Captured in stereo you can hear the staggering clip-clop of the artist stalking the stage, allowing his performance to dictate his next move in real-time. The following snatches of breath are hissed across the reed of his alto, contrasted against the near-silent creak of the assembly. Gradually the hiss becomes a throaty shriek, like a bullfrog thrown into a pot of boiling water. Reverberations multiply, disseminate. The low rumble of exterior conveyance, the clearing of a throat, all engage within the amalgam. Paint-peeling sirens steeped in passages of clairvoyant blues, split into movements by dint of silences that trace the setting like a plaster cast. A photographic negative. Muttered monosyllabic pleas, scrapes, movement obscured by time and distance. Long removed from concrete existence, an incidental carbon transfer. It's the sound of a ghost dragging its chains.