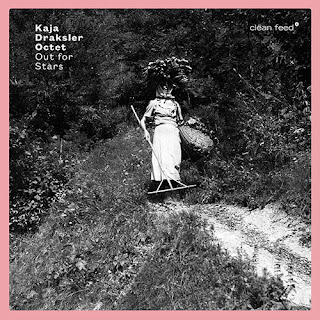 Kaja Draksler is at the forefront of the next wave of free jazz pianists. One can hear it in her previous recordings. The curious virtuosity. The unreconciled tension between radically deconstructive postmodernism and contemporary composition. The flights of melodies into solemn, brittle phrases.

Draksler’s Octet, however, is somewhat different than projects like Punkt.Vrt.Plastik or her collaborations with Eve Risser or Susann Santos Silva. It seems more fully realized, and acts as a space to pursue a clear love of poetry and the vanguard musical forms of the past. This means less noise and clatter, fewer mesmerizing disjointed spirals and more balladry and dramatic harmonies. It means more spacious starts and stops, a smoother blurring of stylistic modalities, and a greater focus on the potential of choreographed simplicity (with eight members, no less).

Based on works by Robert Frost (whose voice appears on the wistfully hopeful Away!) and compositions by Draklser (including a transcription of Handel’s Dixit Dominus), Out for Stars is simply stunning. Romantic melodicism gives way free jazz break-outs which open to baroque harmonics. Soft, haunting vocal chorales drift into sprightly, stilted reeds. Violins and humming winds wisp the voices away and brush the sax and clarinet to the background. The dynamics and dissonance are strong for such otherwise bucolic motifs and brings to mind a darkly transcendentalist take on Charles Ives. This is an album of lamentation and celebration, of oblations to nature and a humanity, of stunningly reconciled contradictions. At its ebullient peaks, one hears the wail of Ab Baars’ sax and Laura Polence and Björk Níelsdóttir’s spiraling polyphonic balladeering and Nordic harmonizing. At its troughs, one hears the hums of a sometimes glittery, sometimes desperate longing. For her part, Draksler is somewhat understated, especially considering the project bears her name. This, however, only means that when she does step to the front, her presence is felt that much more forcefully.

Take, for instance, The Last Mowing. It starts as a euphonic country/gospel vocal duo of the first stanza of the poem (There's a place called Far-away Meadow/We never shall mow in again,/Or such is the talk at the farmhouse:/ The meadow is finished with men.) With “men,” it falls into a heavy drum and bass groove -something akin to Archie Shepp’s “Down Home New York” - that turns the duet into something more powerful than its mellifluous tones in isolation had allowed. This is where both song and poem transition from a meditation on an abandoned farm - doubtlessly tragic for the previous toilers - into a defiant protest by nature’s most humble. The flora accepts its exposure to new threats, as Polence and Níelsdóttir repeat and contort the phrase, “Before trees, seeing the opening,/March into a shadowy claim.” In doing so, they cleverly impose an urban- and protest-rooted – and therefore, anthropocentric - musical format onto a song about nature basking in the retreat of a society.

The piece marches on through pastures of sax squeaks (right) and more linear blues lines and squonks (left). Draksler’s piano then steps forward to reconvene the lost voices and finish the poem. In another twist, several additional voices join the duo as they revisit the first two lines (“There’s a place called Far-away Meadow/We never shall mow in again”) which they transform into a mantra of escape and salvation.

There is something genteel about all of this, but there is also something jarring. It is dulcet, but unnervingly so. Some moments are painfully delicate, as in the series of string solos in the first half of Never Again Will the Bird’s Song Be the Same. Others are more forceful and open, as in the second half the Silken Tent, which playfully glides into the spiraling Handel piece. Or, in the euphoric procession that leads to Robert Frost’s appearance in Away!

If you have heard the Octet’s Gledalec , you likely will not be surprised by what you hear on Out for Stars. This album has a similar balance of traditional and contemporary musical elements, a similar wafting beauty that comforts with its familiarity but haunts with its eerie configurations, repetitions, and deviations. Nevertheless, Out for Stars stands on its own. Its musical inspiration seems somewhat more American and less old-world folk than Gledalec. And, its lyricism often reflects that of Frost, himself: deceptively simple and measured, vernacular but precise, and deeply embedded in both the present and the past that made it.