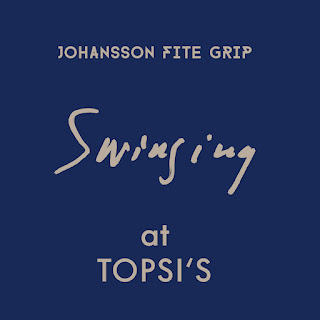 This fantastic new release is from the multi-generational trio of Joel Grip (double bass), Niklas Fite (guitar), and our hero Sven-Åke Johansson (percussion and vocals) and it’s one of the best guitar trio performances I’ve heard in the last decade. The album is just filthy with great ideas that spring from their decisive improvisations, and the trio masterfully keep their clean strings/skins tone just to the left of jagged, which gives the listening experience some grit (i.e. it does indeed swing). Johansson and Grip are regular collaborators and one of my favorite combos. A few favorites from the duo are their Neuköllner Modelle and Zyklus releases with Bertrand Denzler (and Alex von Schlippenbach on one volume of the former) as well as a smoking release with Sten Sandell last year, there are others but I’ll leave it to you to hunt them down. Niklas Fite is brand spanking new to this reviewer, and I’ve really enjoyed getting up-to-speed on the young musicians work via his Bandcamp page, where you can find two more terrific 2021 releases to satiate those thirsty ear holes (two duos, one with pianist Margaux Oswald and one with drummer Raymond Strid, both well worth your consideration). On Swinging at Topsi’s the trio braid strands of jazz’s past, present, and future, culminating in a delightful rope trick that warms like a holiday cordial. Prost!

Recorded at Berlin’s Au Topsi Pohl in September of 2020, the album opens with the aural knots and organic gnarl of “Set 2”, which is alternately probing and exhilarating. Grip whinnies and groans arco accompaniments around Johansson’s rich, skittering patterns as Fite slashes away at any remaining dead air. It’s a thick brew and when things get a little thin the trio toss more flour into their already lumpy gravy. Fite’s style of guitar playing nestles in nicely with those of Derek Bailey and John Russell (whose Mopomoso Fite has played in), though his approach is unique and it really does stand out for various reasons, some of which I’m still trying to put my finger on. His tendency to really get after his guitar with a tempered and satisfying physicality gives him a very broad and interesting dynamic range as it’s applied to his picking technique. This is illustrated thoroughly on the next track “Set 1” where his knotty playing is countered with the forward momentum of Johansson and Grip, the rough surfaces tumble together, smoothing and rounding until the interplay is like butter before pulling the tablecloth and changing course for coarse. This set sails on Grip’s supple low end thrum, which both supports and antagonizes Fite, across a landscape of Sven-Åke’s tight rhythms and textures.

The album is finished off with a pair of standards, the Rodgers & Hart song “Isn’t It Romantic” - of which Ella Fitzgerald’s rendering is among my all-time favorites - and the Green & Hayman classic “Out of Nowhere” made famous by Bing Crosby. Johansson croons the pair over the easily assertive backing of Grip and Fite in his genuine and charming manner. A great way to cap off the album, as sometimes sweets like these sound even sweeter after a sustained focus on rougher textures, such as those of the set material. At 78 Sven-Åke continues to produce some of the best stuff out there and is a terrific mentor to a younger generation of improvisers, working in fact with many of the musicians highlighted in the blog’s recent Echtzeit@30 series, so perhaps you could even consider this that, or vice versa. Topsi’s is a terrific record that tempers a heavy dose of wiry guitar trio energy with an earnest charm that makes it effortlessly engaging and will keep you coming back for more.

Fantastic and in a way agressive music.
If you like your guitar trios raw, try also this album. https://stoned-to-death.bandcamp.com/album/antropoc-n